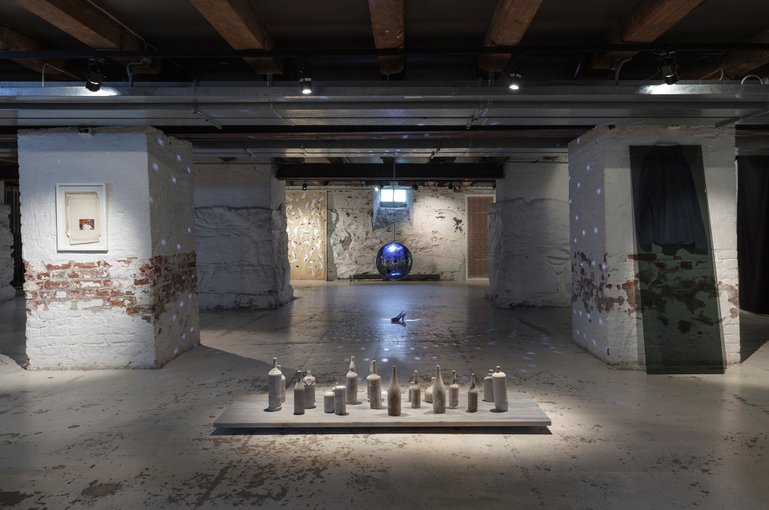 Making the leap towards a personal nirvana

more or less hidden way. For they refer to some of the artist’s very personal experiences and periods

of life, which become the starting points for aesthetic transformations.

Høvik works in a variety of media, ranging from photography to sculpture, found objects, collage

and assemblage, video and drawing. In exhibitions he usually arranges works into spatial

ensembles that are intrinsically interwoven.

brings it into contact with the other works. For Høvik, the name is “a metaphor for enlightenment”1, and

as a paradoxical linguistic image, it imagines a dynamic state of consciousness that combines the

unstable surging abyss (of the soul) with a fragile sense of security.

a found object recovered from the water, a closed, metal cube with a handle, encrusted with

rust. The oxidative growth makes it a kind of material time index, and the fact that the object

can be seen and is present at all is a big part of its significance. It is in fact a waterproof metal

box containing Høvik’s complete CD collection of 422 tracks from 2007, which in a kind of

emotional experiment in the spirit of Albert Camus, he sunk to a depth of 47 metres in a fjord

close to his hometown of Trondheim. The artist explains: “I … wanted to experience how it

would feel to get rid of something as personal as my collection of CDs, with all the identity

and memories attached to it.” There was no intention of salvaging it again. But even at a distance

the submerged, the inaccessible, remained active. Over the course of the following

years, as he suffered a series of personal crises and losses, including the death of his mother in

the island of Utøya, Høvik increasingly suffered from bouts of depression, and the image of the

metaphor for his loss. Only years later did he regain the strength and willpower to face life

head-on again, and in 2017, exactly ten years to the day after submerging the box, he had it

pulled back up again: “[It was] a personal ritual for me, with strong symbolic meaning.” In

keeps it at a distance, visible but untouched: because as Collection 422, the box remains

closed and covered in rust, and the music unavailable. Thereby Høvik turns something that

was emotively charged and representative of his personal history into an object of the imagination,

perhaps in the sense of a “transfiguration of the commonplace”2. The tangible, historical

object is transformed into something aesthetic. It is no longer merely a found object but is

about something (Danto’s “aboutness”); it speaks a language, is an image. In short, its

“aboutness” detaches it from reality. In dealing with such imaginatively charged material,

Høvik sees art as having the potential to be a religious experience (which, by the way, is also

an aspect of Danto’s concept of “transfiguration”) – in the case of Høvik, it is an informal

spirituality that can be experienced individually. His works appear to be driven and carried by

a reflection on the miracle and the horror of the finiteness of life, they appear to exorcise

glance appears to be an environmental still life is in fact a kind of self-portrait. A rectangular

stone slab – precious, blue veined Azul Macaubas quartzite, cut to the height and width of the

are spread across it – in the form of grey concrete casts. No two forms are alike, and each one

is an example of different types of alcohol which, according to the artist, “feel like they were

a big part my life from the age of 13 until I stopped drinking at the age of 37”. Reduced to

or can be guessed at. The concrete weight of these manifestations of memory gives them a

strong visual presence, but through the grey deadness of the material, it is also as if the ghosts

of the past have been exorcised. Høvik has arranged the bottle casts so they appear to be

randomly scattered on the frozen swirls of the blue Macaubas – so here again, he picks up the

nest on the waves motif by representing the bottles as an extremely problematic nest. For him,

Another typical Høvik process of poetic memory work, which he began in 2010, can be seen

texts – his own, ones he has found, some of them handwritten – are layered on top of one

another to form a kind of conceptual diary, subjective, intuitive and often linked to existential

themes. Untitled, for example, shows Høvik as a teenager with his late mother, and the

message to her. In works of this kind, the uneven layering of sheets of paper of different sizes

and textures literally gives the topmost sheet a story: the different layers are the memory-triggers

that form the foundation of the image at the top. This use of fragments of writing and images

as a materialisation of emotive states also has literary forebears, from Friederike Mayröcker to

Arno Schmidt – and, as in Collection 422, the accumulative process deliberately denies clarity

by opening up the material to the imagination. For Høvik, the sheets represent real experience,

writing a no longer visible story that is only hinted at by the cover page. The rest is left to the

and photographic immediacy. The work consists of a number of Polaroids that Høvik took

over the course of about a year on hikes: landscape photographs through the seasons, the solitude

of the forest, trees in front of trees or a tree on its own in front of a vast horizon; lakes,

water lilies, and only rarely a human being, for example as a back view in a canoe. The

ephemeral nature of perception and nature fits the unique character of the photographic medium.

instead,” the artist comments on the creation of this group of works. As is often the case with

the Fugees – a cover song with a complex, forceful sound that jars with the sublime calmness

of nature in the pictures.

Inside the cast are two flat metal bars running across the entire breadth, and a collaged blackand-

white photo on a background of the same blue. The photo is of a young, buffed-up Mark

Wahlberg posing for Calvin Klein in the 1990s. While the plaster cast is reminiscent of body

portraits by artists such as Matisse and Picasso but most closely resembles an Yves Klein relief,

Høvik contrasts it with a clichéd, pop-culture-style “ideal body”. In fact, there is also a

personal element to the work: the cast is of Høvik’s chest, and the metal bars inside are from

of an operation he underwent in 2005. As a teenager he suffered from a moderate case of pectus

body as the epitome of an ideal male physique. The bars were implanted in his chest for three

years. So here, once again, he deals with highly personal material by giving it visual form.

Most of the other works in the exhibition also explore borderline experiences, both physical

(again the artist’s body size) leans upright against a wall, and a blue business shirt hangs behind

the glass. “I have worn this many times to appear professional and to hide my depression,”

says Høvik. On the back of this emotionally and experientially saturated garment is a

short extract from the expert opinion of a psychologist, written about the artist after the actual

“epicrisis” referred to in the title. Elevated Summer (2017) deals in a different way with an

excursion into liminal experiences. The work comprises a large landscape photograph of an

The work is perhaps the most direct expression of Høvik’s continued craving for extreme experiences.

With searing clarity, the text tells of a camping trip in the woods Høvik went on

with his girlfriend, where they tried LSD for the first time – and had a terrifying, life-threatening

trip. The works on the sheets of paper were made under the influence of the drug, the photos

show the place where it happened. It was an experience of a dramatic disappearance of

reality, and as Høvik explains: “Although I had some interesting perspectives and visual insights

during this trip, it was one of the most intense and traumatic experiences of my life so far.”

Each in their own way, Høvik’s works are self-portraits of inner rebellion and perpetual unrest

as well as attempts at invoking the eternal – and between fear, a euphoric craving for freedom

and a spiritual reverence for nature, they make the leap towards a personal nirvana. 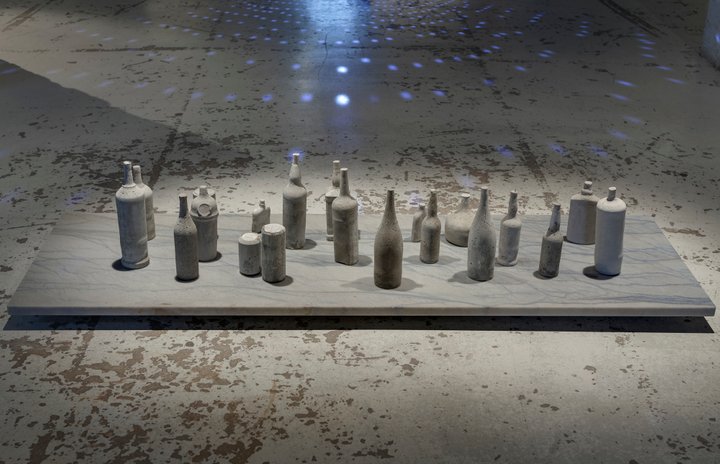 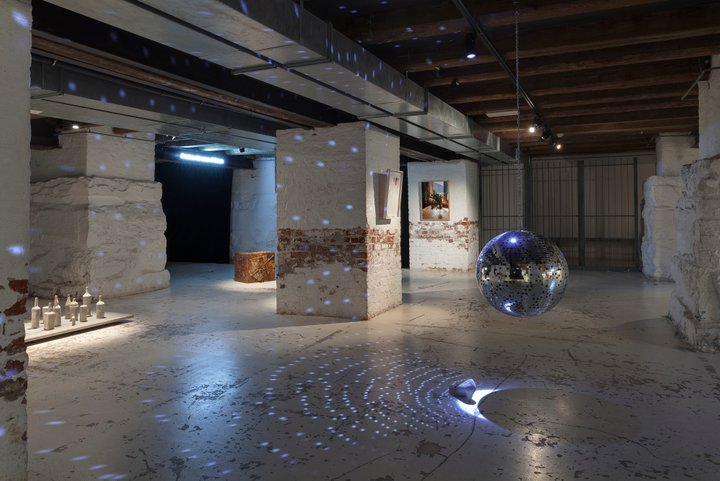 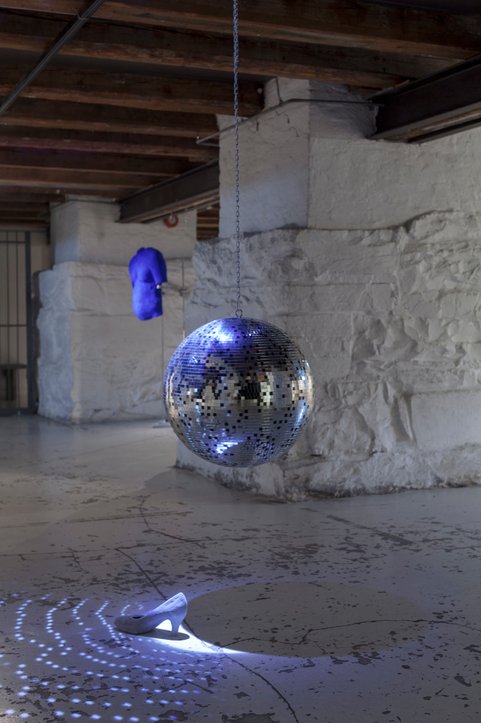 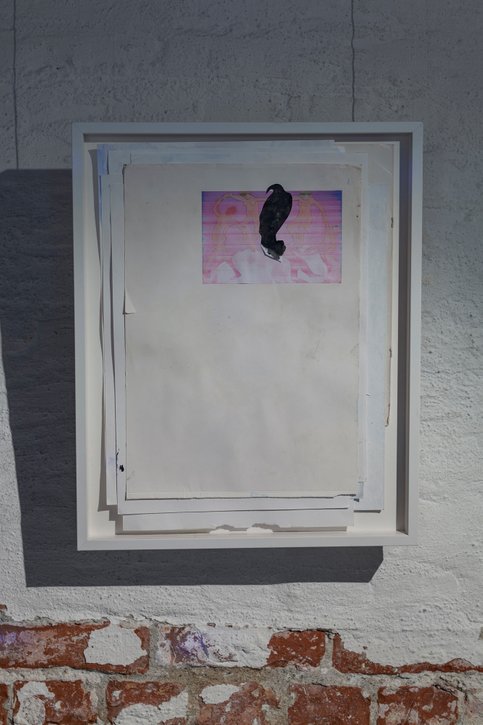 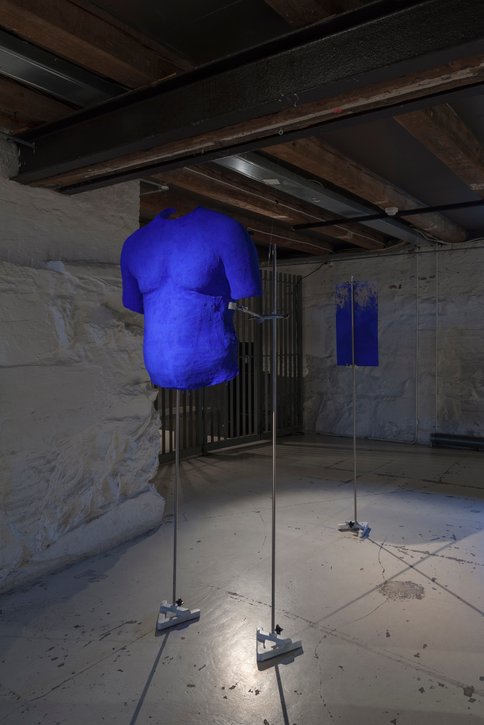 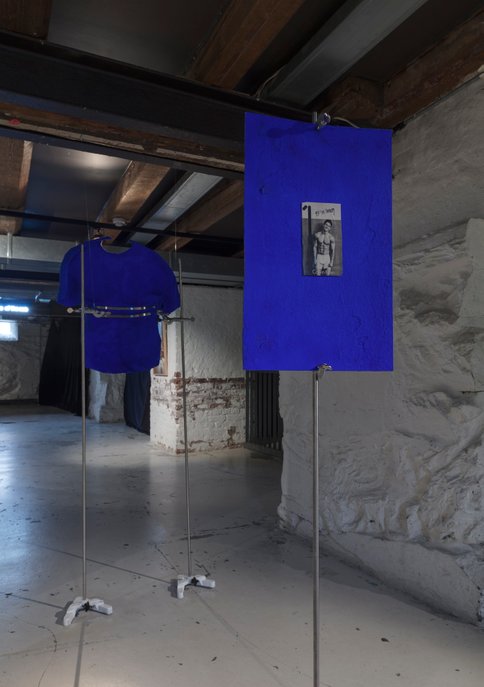 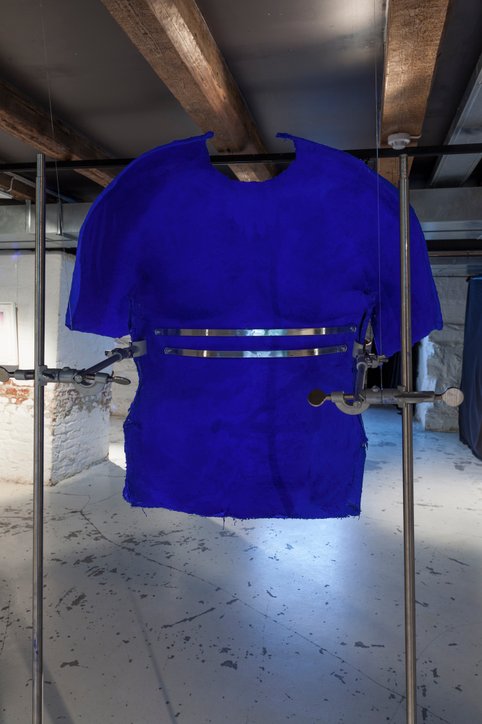 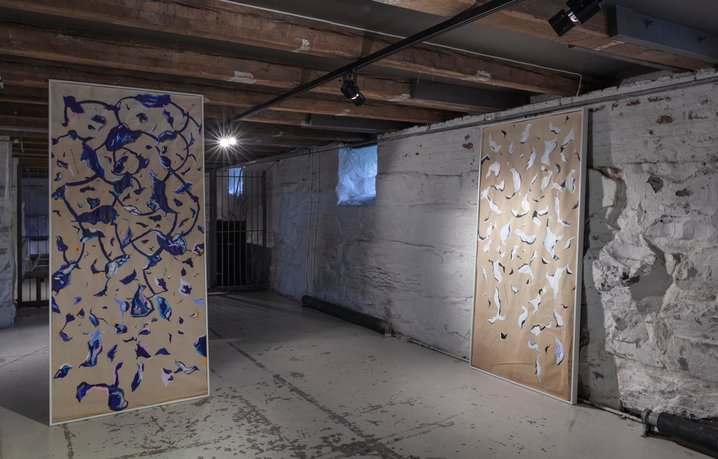 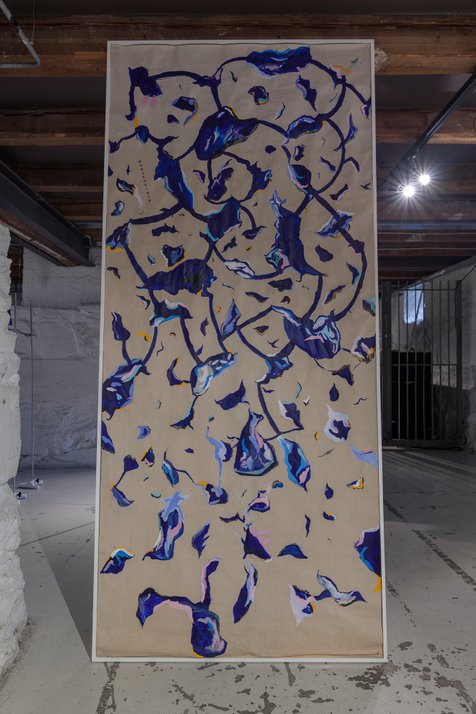 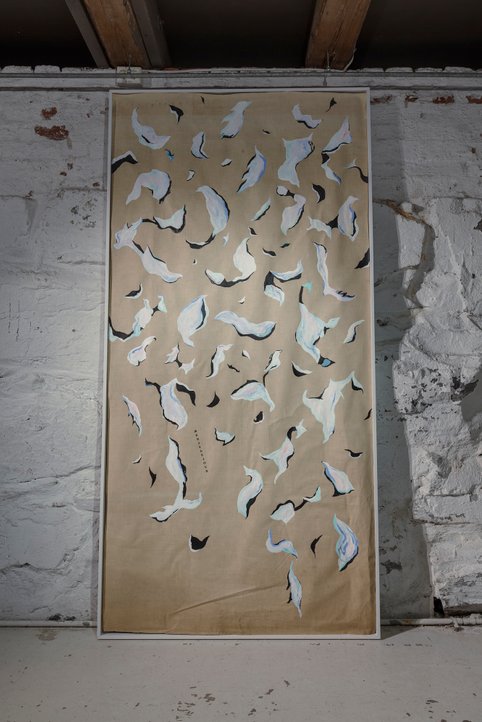 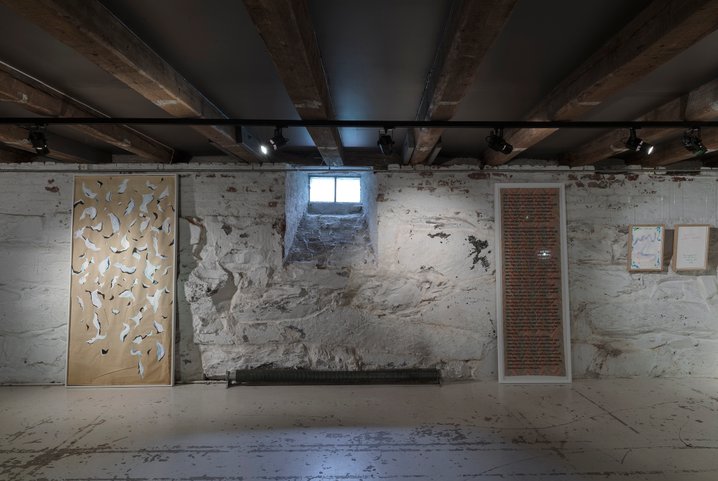 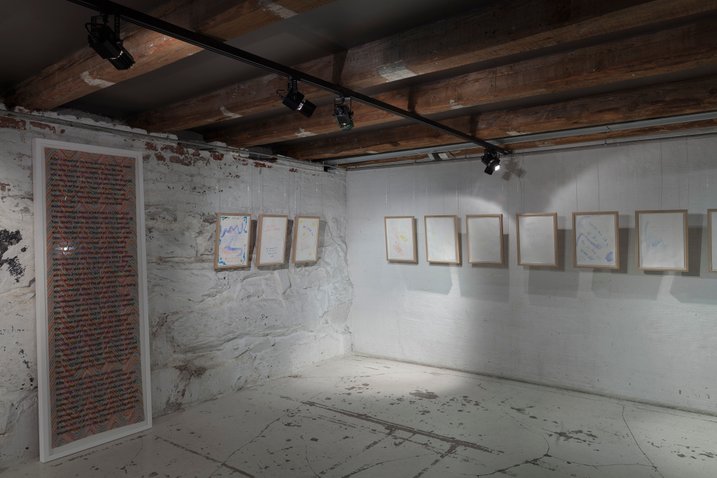 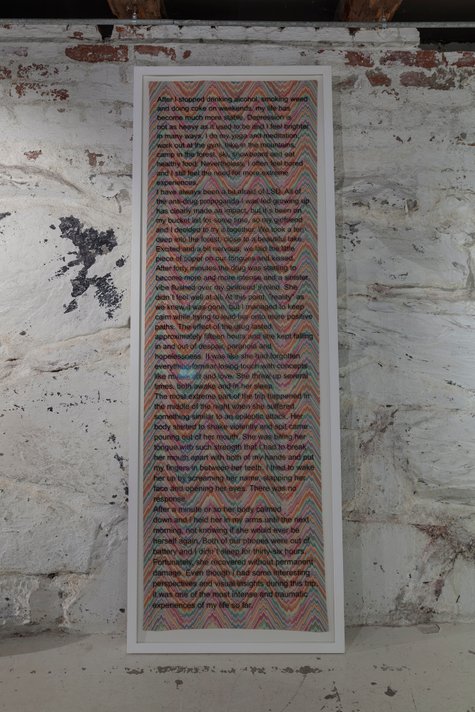 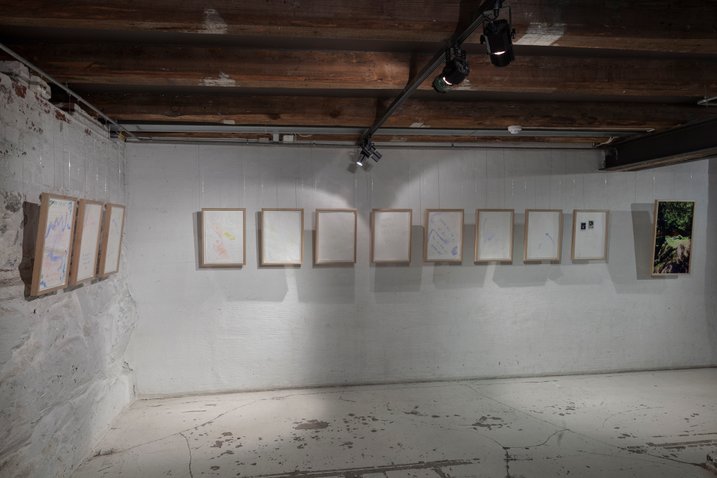 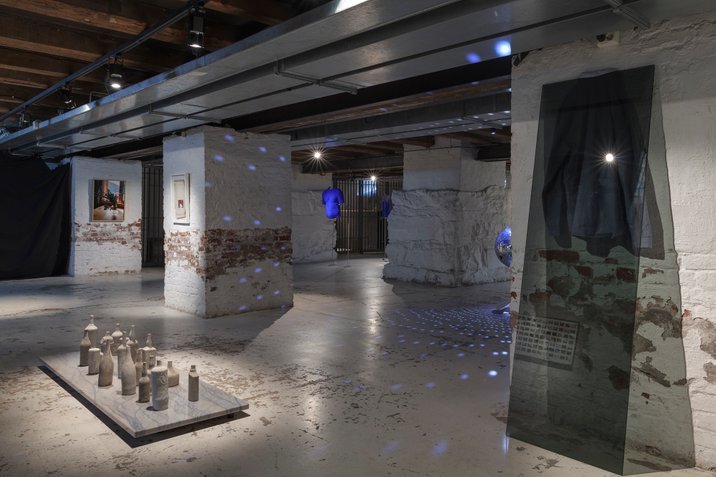 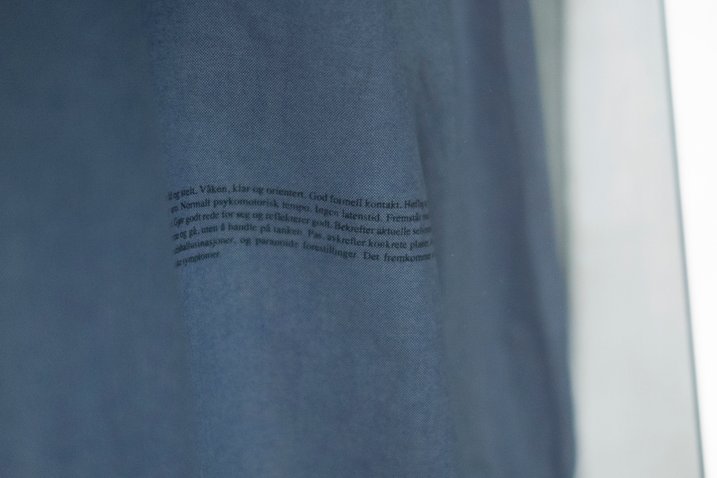 Detail of text on shirt 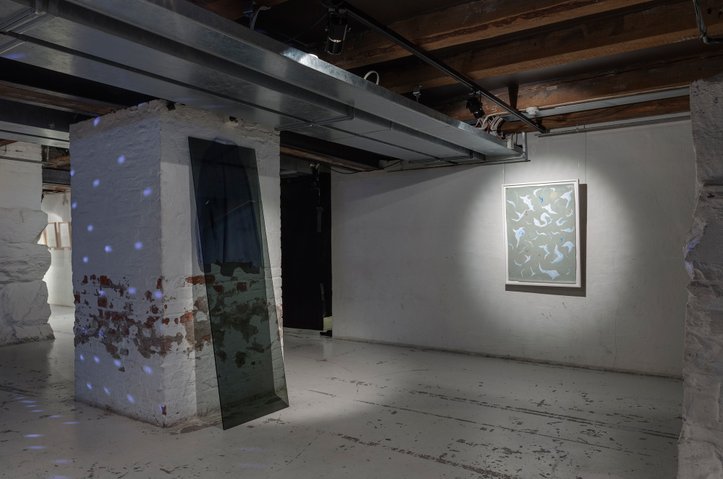 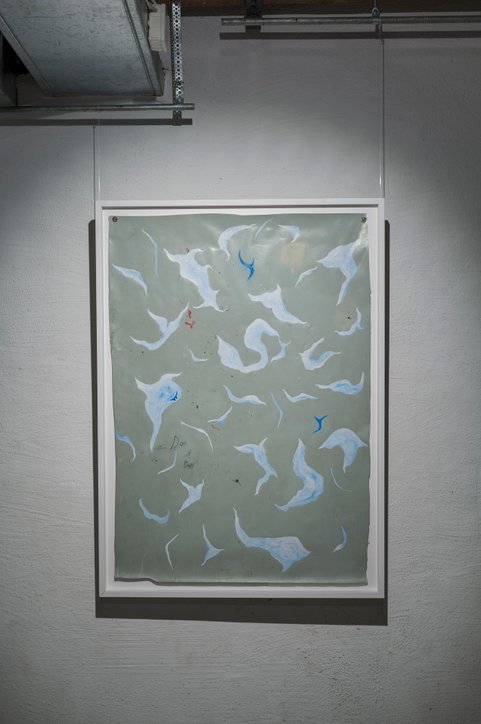 Letters to the unborn, 2018 Acrylic on found plastic cloth 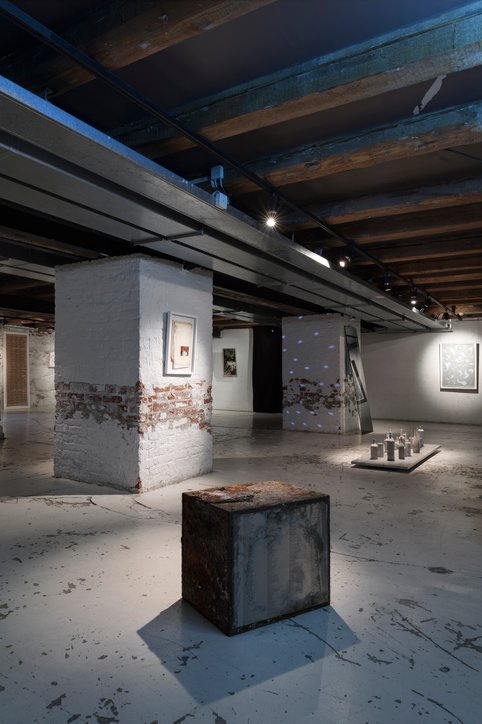 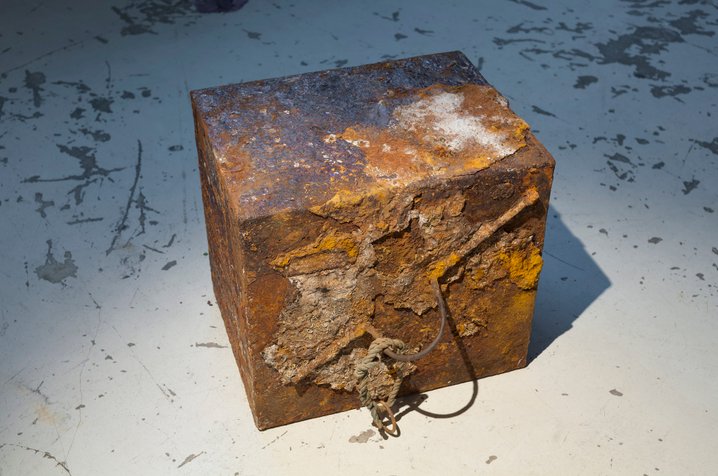 422 original cd plates in metal container. The box were ten

years on 47 meters depth in the Trondheimsfjord, Norway. 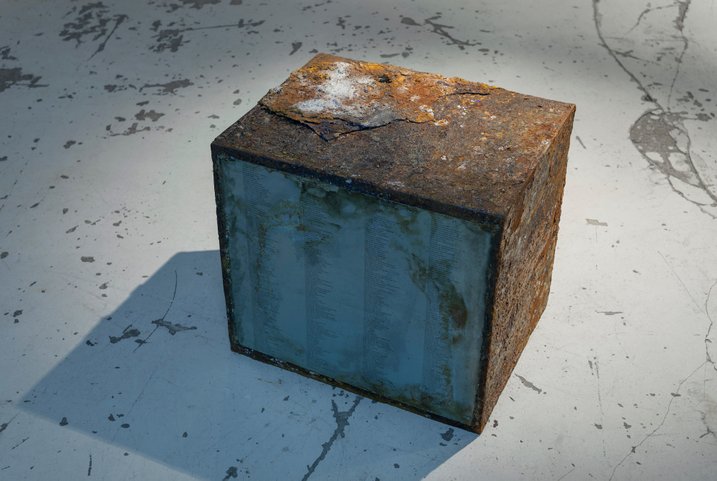 All titles engraved on the backside. 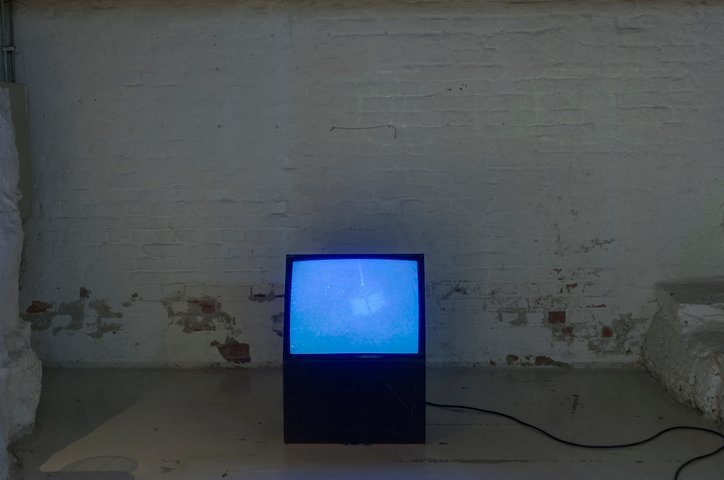 Video from the immersion of the box in 2007, and 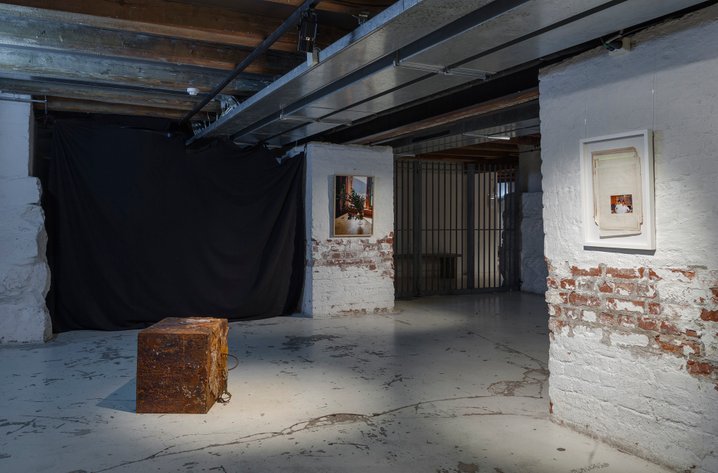 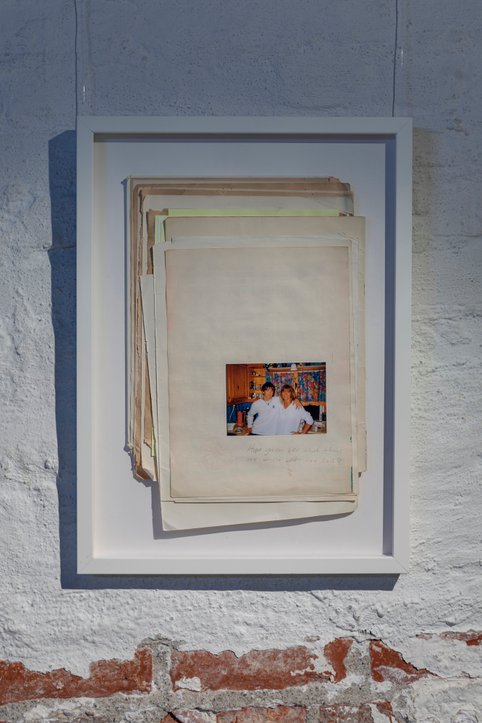 Hope you can see that things are much better now, 2018 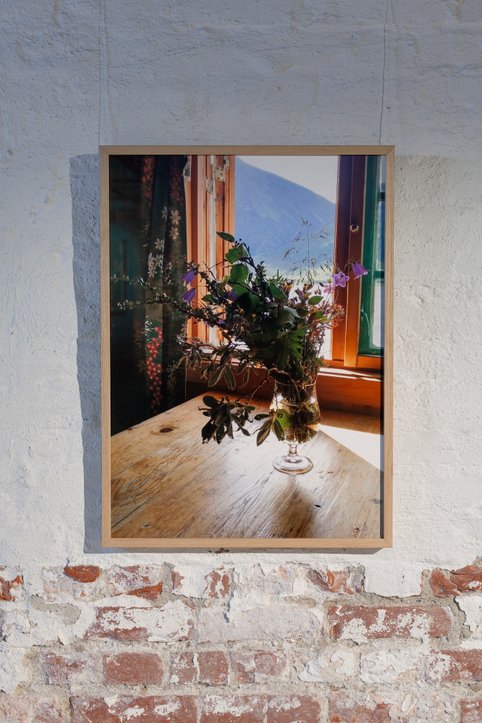 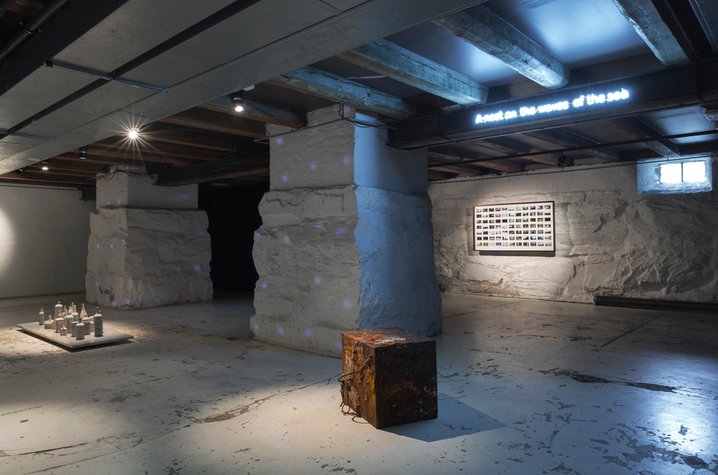 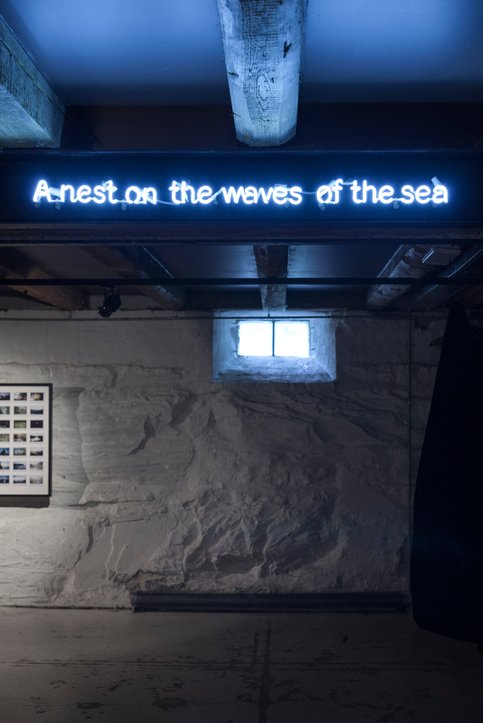 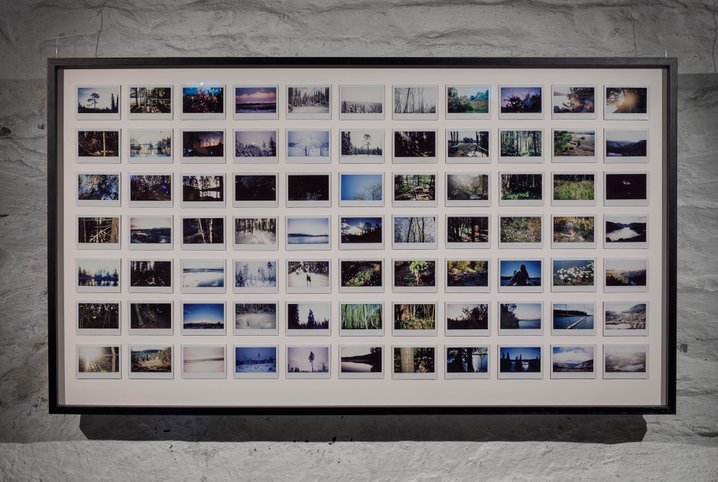